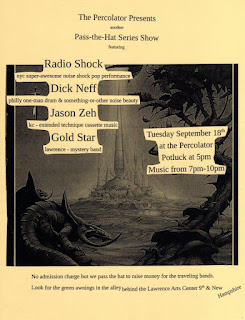 Coming up is another Pass-the-Hat series show at the Percolator. This time we are graced with the talents of a couple of my favorites: Radio Shock and Dick Neff. As usual... potluck at 5, music from 7-10.

Radio Shock is a one-man band that plays sometimes danceable, often dissonant music. Among the genre tags that have been applied to Radio Shock are No-Core, DDM, Glitch House, and Jank. Created by M*P*Lockwood specifically to tour and entertain live audiences, Radio Shock is designed for maximum mobility. The music is made using only a found Yamaha keyboard, a uniquely tuned guitar, and a few effects and toy noisemakers (sometimes played all at the same time), all of which can be carried on M*P*'s person. Because of this, he has been able to tour across the country by Greyhound bus. In fact, Radio Shock follows the "Permanent Tour Philosophy" and any lack of shows in the immediate future should be considered a brief break.

Since its inception, Radio Shock has been lucky enough to play shows with like-minded artists such as Neon Hunk, Parts and Labor, Sightings, Forcefield, Mincemeat or Tenspeed, Wolf Eyes, Unicorn Hard-On, etc. Radio Shock has put out several releases on CDR, cassette and vinyl, both self-released and with the help of various independent noise labels. Most recently, M*P*Lockwood has initiated a new record label imprint named "decoherence" and issued its first release, Radio Shock's "internal symmetry" cassette.
The intent of a Radio Shock live performance is to create a cooperative experience with the audience. Radio Shock does not use a microphone to sing through because the voices of the audience are just as important as that of M*P*Lockwood. Songs are not programmed, but rather extended or changed on the fly based on audience reaction/input. Radio Shock shows have ended with audience members playing keyboard, found drums, M*P*'s guitar, dancing on the stage, and otherwise becoming Radio Shock. http://youtu.be/E0R6vi_87r0

Dick Neff... is burzee aka Lance originally from the South and now from Philly for a while. He's a one-man band that is sort of like minimalist hard metal. He does some odd thing with a synth maybe to create an awesome noise while playing frenetic drums. Outstanding. Makes me smile every time. http://www.youtube.com/watch?v=Ixll_R4aLJ4

Finally, or rather, Firstly, Gold Star will open the show promptly at 7pm. Expect loud rock and quiet noise from this act.

Please bring some food and show up around 5 for potluck, music at 7. It's been a little weak in terms of attendance and everyone wants to see you and say Hi and chit-chat and enjoy some food. Remember, we love you and want you to be nourished both by food and by intellect and by art. So come eat, discuss and experience. Maybe even create!?

Posted by Lawrence Percolator at 9:58 PM