Janata (The Masses) by Priti Cox 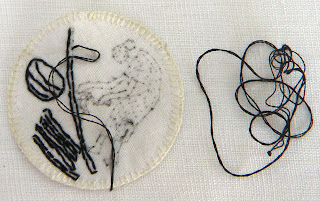 Janata (The Masses)
Corporate globalization, by design, is driven by acquisition and profit. A gain in one part of the world means that someone in another part involuntarily pays the price. In India today, growth and development are euphemisms for inequity and displacement. Governments and corporations not only in India but across the world are grabbing for resources through military intervention, outright war, intimidation, and simple business-as-usual. The five percent of India that is, in the business propaganda term, "shining" today is leaving behind a very long shadow in its path - the other new India that is grey, desperate and violent. What's happening in India is proof that when people are uprooted from their rightful access to "common property" resources such as land, water, seed and livelihoods, they are not going to take it lying down--even if they do not have powerful lobbyists with money and men with guns to fight for them.

Encroachment: Manufacturing Revolution
Saturday, October 1st
10 am - 4 pm on Massachusetts Street
We have a situation in which the government is acting as a guarantor to the expropriation of access to common property resources across the country and handing over those resources to private interests. This is leading to inequity - Dr Binayak Sen, doctor and civil liberties activist 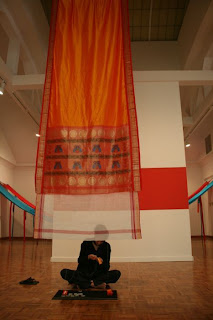 This performance/installation is about the ongoing assault by the Indian state and large corporations on the country's Adivasi (indigenous) communities, whose home happens to be on the rich mineral belt of India also known as the Red Corridor. In defending their land and stave off annihilation, the Maoists', or Adivasis - turned - revolutionaries' only recourse has, sadly, been to take up arms.

Bija (the seed)
September 30th
noon - 6 pm at the Lawrence Percolator
Done in the style of Rangoli (Indian floor designs), this performance/installation using powdered and whole grains and seeds attempts to show the intricate and versatile biodiversity of India, which is under threat in the age of economic globalization and monoculture. 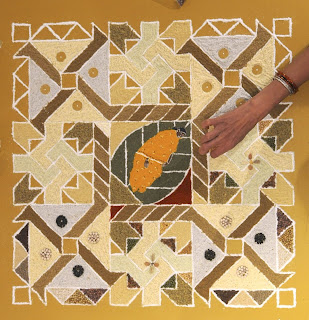 Find out more about the work of Priti Cox at her website,
Vanishing India.
Posted by Dave at 9:08 PM