Paper Products for the People: Eric Farnsworth and T.J. Tangpuz

from the Lawrence Journal-World 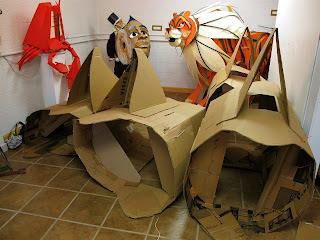 Anyone wanting proof need look no further than the work of Juniper Tangpuz.

A 2003 Kansas University graduate in sculpture, the Kansas City, Mo. artist crafts the unthinkable from the material, making everything from drums to large animals to accordions from cardboard and its cousin paper.

“It played such a huge presence in my childhood, you know, just making things — it’s like just natural for me to cut,” says Tangpuz, who also works in metal and stone, makes mechanical pieces and even dabbles in comic book art. “But now I use it because it’s more practical — it’s cheap, it’s abundant, it can be recycled. And, I can fold it up, which is really nice. So, I can make big things and kind of compress them. I can carry it up stairs and through doors and things like that, it’s very easy to transport.”

Tangpuz will have some of that unique art on display April 1 through April 30 at The Percolator, which is located in the alley behind 913 Rhode Island. The show is in conjunction with a workshop called “Build this Cardboard Thing” that runs March 25 through March 27. Participants will share their completed work during a parade paired with the exhibit opening reception from 6 to 9 p.m., April 1.

“Well, aside from my long, enduring affection for corrugated cardboard, the origins of the cardboard workshop is a bit of a fluke,” says Lawrence artist Eric Farnsworth, the man behind the workshop with Tangpuz. “I have built a few fairly large cardboard things, so I thought it would be nice to get people together to build an animal-like thing, and walk around with it. Somewhere in the planning stages, someone suggested that it would be fitting to do a little parade on April 1st, so that set the date.

“There is a vast quantity of cardboard around town, and it sounded fun to put some of it to use.”

He immediately enlisted Tangpuz, he says, because aside from being one of his favorite artists, Tangpuz has a unique talent with paper products. 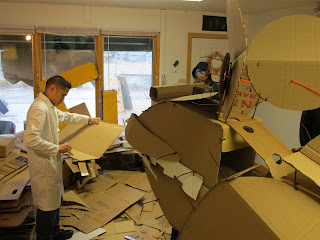 “If you are planning to build something silly and large out of cardboard, there is no better person than T.J. to have in the room,” says Farnsworth, calling Tangpuz by his nickname. “So he was a natural to have involved with this project, and we are happy that he had time in his schedule to participate. I’m excited to see what he’ll come up with.”