from the Lawrence Journal-World
January 9, 2011
by Michael C. Auchard 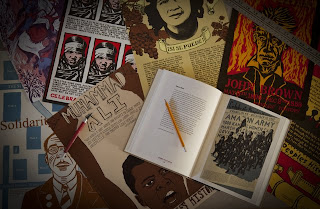 The "Celebrate People's History" project opens at The Percolator, located at 9th and New Hampshire St., Saturday. The exhibit features posters and prints that document some of the unsung civil rights struggles in American history.

— Lawrence It is often said that history is written by the winners. After the turmoil between two opposing cultures, the victors often claim both the spoils of war and the ability to reframe their past brutalities in a more socially palatable manner.

The “Celebrate People’s History” project, an exhibit of politically motivated prints and posters, opening Saturday at The Percolator, aims to shed some light upon the lesser-known, forgotten or simply ignored struggles that have been brushed aside from mainstream consciousness. A book-release party for “Celebrate People’s History,” a collection of the various artists’ posters showcased at the gallery, is scheduled to conclude the exhibit and will be Jan. 28.

The project’s organizer, Brooklyn artist Josh McPhee, says from the beginning he’s wanted to focus on subjects that were “undercelebrated” in a straightforward, eye-catching manner.

“Here’s an attractive image and some very simple information to put out into the world,” he says. “We’re not telling you to buy anything, it’s more that this is our common shared history and we’re putting it back out into the public space.”

McPhee says what ties the whole project together is the multicultural theme and the access the medium of posters provides to the masses. The dozens of artists whose work will be on display at the exhibit all worked within this framework.

This is a small collection of prints and posters on-hand for the "Celebrate People's History" exhibit at The Percolator, opening this Saturday.

“It’s history that’s being collectively written by anyone who wants to participate,” he says. “That’s not a clean, unblemished slate. It has its ups and downs and bumps. It’s something that needs to be alive. It’s not packed away into history books or bronzed on statues. It should be in your face and something we engage with.”

David Loewenstein, member of the Percolator’s board of directors and participating artist in the exhibit, agrees with McPhee that the use of posters is an efficient way to engage people, using public space as a place for knowledge and education instead of simply advertising. He says it’s important for everybody to consider the environment they live in and its past.

“So often we overlook these events at the time they happen,” Loewenstein says. “It’s now more important than ever — not for academics, not for fancy artists, but for regular folks — to think about what their government is doing, what the social policy is about, and how it relates to their lives individually. I think these prints, if you spend some time with them, will really spark some interest in that kind of thinking.”

Loewenstein says he is excited about the upcoming exhibit and has several plans for the event. Besides the exhibit itself, there will be a collection of older posters from the 1970s on display and a community wall, a kind of microcosm of the larger “Celebrate People’s History” project.

“There’ll be a wall in the gallery where people can write, or draw, or post similar kinds of stories — things that have been overlooked, or people we need to reconsider and figure out their importance. We’ll have a wall where people who visit can post those things. It’s sort of the starting point for producing some form of compilation of “Celebrate Kansas People’s History.”

Another main draw to the exhibit will be at the book release party, where the Spencer Museum of Art’s curator of prints and drawings, Stephen Goddard will speak about the historical context of political prints and about McPhee in particular.

“I really admire what (McPhee’s) done in terms of organizing a printmaking cooperative and the way he’s used his Web presence and ability to spread the word electronically,” Goddard says. “I think he’s really done a fabulous service and speaks very eloquently about his sense of mission. I think he’s a great champion for print art.”

Goddard says he believes this kind of exhibit is meaningful for people from all walks of life and political leanings.

“It’s important for this kind of exhibition to be seen anywhere. We’re lucky Lawrence has a long history with people involved in radical arts and the whole range of political beliefs. I think it’s important to keep this alive.”