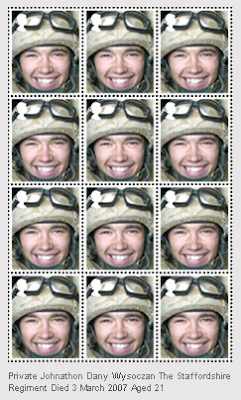 Artist and filmmaker Steve McQueen imagines such "intimate and public" interactions in his new project, Queen and Country, which creates Royal Mail postage stamps bearing the faces of British military fatalities. The UK's official "war artist," McQueen came up with the idea after a 2003 trip to Iraq.

McQueen is working with 137 military families, who have each selected a photo of their deceased family member to appear on a stamp, and he says the project won't be complete until all families have been offered the oppportunity, until the UK is no longer involved in the conflict, and until the Royal Mail makes the stamps official.

The artists says the work isn't pro- or anti-war. It "helps us reflect upon the many complex feelings we have about war... In the end, it's an art work – a tribute to the deceased and a reflection on the validity of war, the structure of power and notions of national identity."

McQueen and more than 11,000 supporters are petitioning the Royal Mail to create official stamps from the project.

via: Eyeteeth: A journal of incisive ideas.
Posted by JOhn at 11:23 PM

Not anti-war my bottom. What's wrong with it being on one side of the fence?